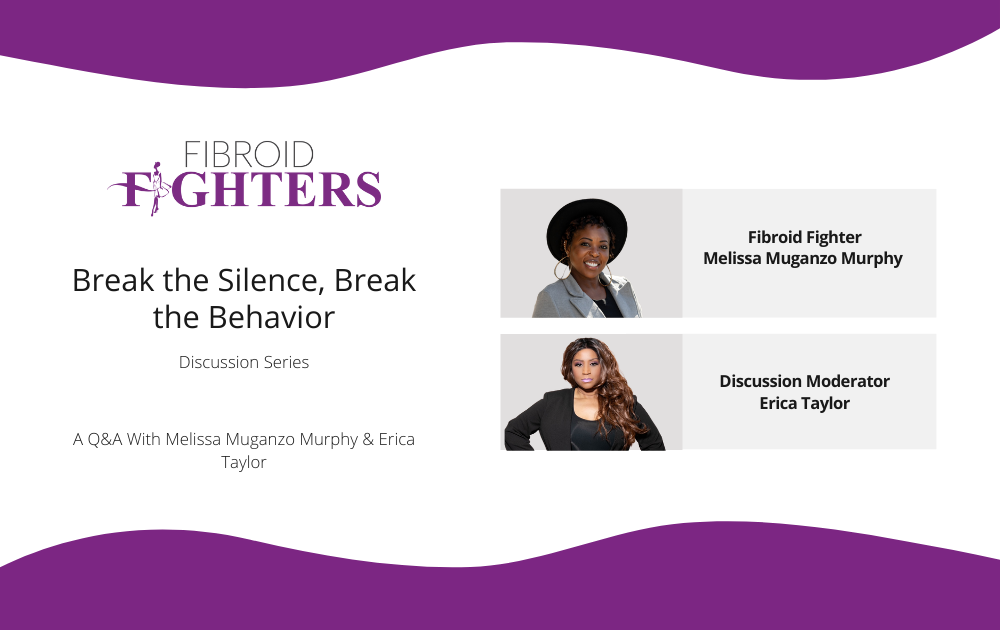 “The entire time my body was trying to tell me, ‘hey, something is wrong’, and I had normalized it because generationally, I was told that having bad periods was a right of passage…”

Many women think having painful cramps and heavy menstrual bleeding during their period is normal; and when they find out otherwise, they’re shocked. Uterine fibroids affect between 70 to 80 percent of women before the age of 50. Despite how common they are, the lack of awareness and access to reputable information about fibroids is widespread. In fact, 20 percent of women believe that hysterectomy, the partial or full removal of the uterus, is the only treatment option available.

We invited renowned Activist, Entertainer, Philanthropist, and CEO of Muganzo Entertainment, Melissa Muganzo Murphy, to join our host Erica L. Taylor on our Break the Silence, Break the Behavior YouTube series and speak about her experience with uterine fibroids. When she was in college at the age of 23, Murphy began to experience abnormal period symptoms that negatively impacted her everyday life.

However, Murphy didn’t think much of it, since she was told from an early age that everybody in her family had a bad period. She realized that not only was the stigma passed down through her family, but also the fibroids themselves, “It made me think it’s not just me, my mother had this issue. Who knows if my grandmother had it too, it’s been passed down.”

Check out the full Break the Silence, Break the Behavior interview HERE.

As an active young person performing on stage, she was constantly on edge about her period. “I would be on stage nervous of a bleed out…I would have out of control headaches and cramping.” Not only was she enduring painful, heavy periods and excruciating migraines, but also anemia and acne.

A turning point for Murphy was when she was in the store with her mother and she had a massive bleed out, also known as hemorrhaging. “I was in the store, completely embarrassed, going through jeans and my mom was like, ‘we need to call somebody!’” Initially, Murphy’s mother called her sister’s godmother who was an herbalist, but she was focused on future healing techniques, not what Murphy could do here and now to stop the bleeding.

Thankfully, her mother called a family friend who was a nurse to see if she could help. In an instant, the nurse knew what was wrong, “Girl, you have fibroids,” she states matter of factly. She was so grateful to this family friend who knew what was wrong. Her body had been trying to tell her, but sometimes, it can be difficult to listen. And just like that, Murphy’s fight for normalcy and bodily autonomy had begun.

Now that Murphy knew fibroids were causing her symptoms, she started looking into available treatments. Since she was in her 20s at the time, she wasn’t given many options. Initially Murphy thought, “Hey, I heard that this birth control thing is supposed to regulate periods, I’ll try that!” Murphy was hopeful that this would be an easy fix; however her fibroids had another idea. “I tried it and ended up bleeding for six months…”

Even though birth control has been known to treat heavy periods and severe cramps, it doesn’t effectively treat fibroids. Murphy adds, “They didn’t tell me about a myomectomy or UFE [uterine fibroid embolization], or how to reduce inflammation…they didn’t tell me about any of those things. They just told me you’re too young, so here, take birth control.” This frustrated Murphy and made her feel like she was on her own when it came to finding a way to manage her fibroid symptoms.

It was years before Murphy heard about a non-surgical treatment called uterine fibroid embolization (UFE). “Not once was UFE an option for me or was I told that it was something available, I would have done that right away,” expresses Murphy. In fact, studies show that 44 percent of women diagnosed with fibroids have heard of non-surgical options like UFE and close to 73 percent didn’t hear about it from their OB-GYN or primary physician.

So, Murphy set out to better understand her fibroids and treatments available to her. Unfortunately, she was overwhelmed with how little information she could find on what directly causes fibroids to grow. Murphy shares that felt like this lack of education and awareness was a roadblock to her finding an effective treatment solution. “Because if you know how something is started, you can prevent it,” states Murphy.

Taking Control of Her Health

After birth control didn’t help her uncontrollable fibroid symptoms, she inquired about a hysterectomy, but her doctor’s wouldn’t approve the procedure because of her age. Despite the fact that she couldn’t undergo a hysterectomy, they left out that there were other treatment options. She was appalled that they never gave her non-surgical alternatives like UFE. Her doctors continue to insist, “You can do birth control or you can manage it on your own.” Since birth control was now out of the equation, Murphy turned to evaluating her lifestyle. “Once I realized I couldn’t get a hysterectomy and birth control exacerbated my fibroids, I thought about my diet, “ shares Murphy, “If changing my diet is the only option that I could do at my own pace, like I have full control over that, I could do that!”

“So, I eliminated processed sugar, dairy, red meat, poultry…” Murphy adds that after a while, “You could just see my body say ‘thank you’.” Murphy adopted a vegan diet to combat her life-altering fibroid symptoms, and, for a while, it seemed to work. If you’ve ever tried to stick to a diet, you know it can be extremely challenging, especially in its early stages. Murphy admits she faltered on her diet and began eating whatever she wanted.

Consequently, at the age of 28, her symptoms “came back with a vengeance,” Murphy admits. “I was bleeding out in movie theaters, in the car…I mean talk about embarrassing!” exclaims Murphy. Many women tend to think of their struggle with fibroids as a personal journey; however, that’s not always the case. Murphy felt defeated, “Why doesn’t my body work right,” divulges Murphy. Murphy thoughtfully shares, “At the time I was thinking that I’m the only one experiencing this but in reality, my daughters were watching this, my girlfriend (now wife) at the time was watching this, my sister was watching this…people are experiencing these traumas with me.” At this point, she knew she needed to make a serious decision.

Fighting for Awareness for All

After going to the doctor’s for an ultrasound, it was determined that she had three fibroids. “I was so frustrated because I didn’t know they could come back. I had no idea. And people don’t tell you that.” As she was leaving the office, she decided to go permanently vegan to help manage her symptoms.

Over the years, Murphy’s personal experience and frustrations about the lack of education about fibroids fueled her activism surrounding the subject. She began seeing the gaps in awareness and where her story could help others going through the same thing. Murphy wanted to make sure others didn’t go through what she did. “Everyone is impacted by this. And that’s why I find it so interesting that people still don’t care,” Murphy points out, “That’s what really caused me to put my entertainment hat back on and really dig in to provide people with knowledge the only way I knew how and that was through [creative] expression.”

Murphy also shares that she recognized that this was a topic she wanted her daughter to be prepared for, since fibroids and abnormal periods can be genetic. “I have a daughter who is going to experience her own version of body confidence [while] navigating life and I want her to be confident: I want her to be knowledgeable!” exclaims Murphy.

Not only did Murphy see raising awareness about fibroids as a personal fight but a public service as well. As a member of the LGTBQIA+ community, she saw the major health disparities within the trans and unhoused communities. Murphy was concerned that crucial members of society were being left out of the conversation regarding fibroid education and treatment options. “How many of those folks have fibroids or uterine trauma, yet they just don’t have access [to resources],” Murphy points out.

Murphy’s activism has gathered momentum by helping silenced communities share information about fibroids and other women’s health issues. Murphy participates in causes like our Break the Silence, Break the Behavior series and is producing her own documentary film, My Cyster’s Keeper to help raise awareness about fibroids and treatment options. “There are so many people who need an open door, a voice, and they need somebody that cares. So, that for me is what did it. If not me, then who. I can’t wait for the world to make it happen, I have to make it happen,” declares Murphy. And she’s right, if individual people and organizations don’t step up to break the silence surrounding fibroids, who will?

The Fibroid Fighters Foundation is committed to helping people get the information they need to make health decisions that will help them live without debilitating fibroid symptoms. Like Murphy, we hope to raise awareness and provide transparent information about treatment options, both surgical and non-surgical. We want to ensure that women are aware that hysterectomy is not their only option.

Murphy emphasizes the importance of speaking up about taboo subjects like fibroids and period problems. We know just how vital sharing your fibroid story can truly be. Share your fibroid survivor experience to help motivate other women to learn about fibroids and find an effective treatment solution. Just like Murphy, you, too, can be an fibroid awareness activist by submitting a written, audio, or video response on our website.

About the “Break the Silence, Break the Behavior” Youtube Series

The 2021 video series, Break the Silence, Break the Behavior offers in-depth interviews with legislators, health activists, and celebrities regarding uterine fibroid awareness. Our goal with this series is to bring attention to the fibroid epidemic and the impact it has on women’s health. 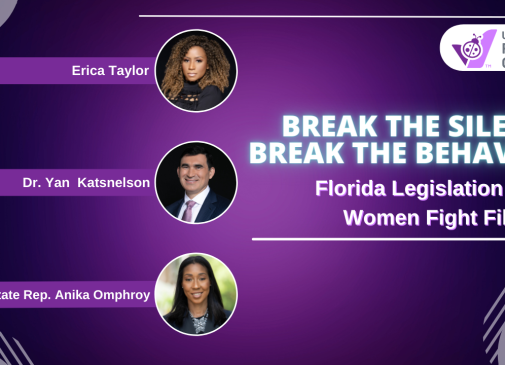 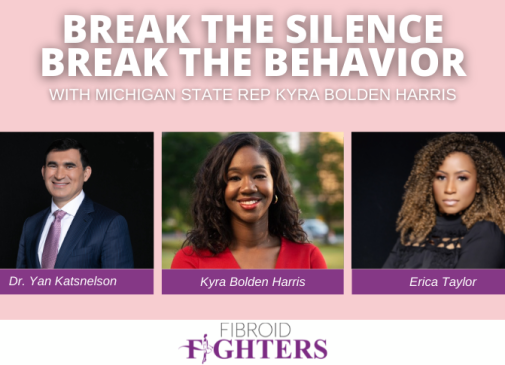